Oh. Oh. It’s just so hard to know where to start.

As an elementary school English teacher employed by a dispatch company in Japan, March always involves a dip in work and pay for me.

This year has been a whole ‘nother experience.

My contract year and the days I had to show up to school ended March 10th, although my actual classes ended in February 28 due to Covid19. A few days before the contract ended I learned that the company I work for had lost the contract for the city I worked in..and didn’t have any cities near me they could shift me into.

Next school year starts April 1st. Japan is still planning on it starting…but then again in Japan people are still going to cherry blossom parties and Prime Minister Abe is JUUUST starting to admit that maaaaaaaybe the Olympics won’t happen this year…but the Gov. of Tokyo wants to declare a lock down. It’s all complicated. I think Japan is in denial.

I’ve had the insanity of being an asthmatic social distancing myself when it feels like so few other in this country are people are… while also making sure I’m employed the next coming school year…even though I think that the school year maybe shouldn’t start.

All while trying to get more organized through the filter of knowing I have ADHD and need new skills, at a time my days and nights all blend together in mostly emptiness.

My family back home is taking precautions. I would often travel to see them this time of year but..well..I can’t do that during a job hunt and the end of the world. I worry about them. I really do.

In the last 48 hours I’ve turned down a job, thought I had another job, lost that job, applied for different jobs, and accepted a job offer from my previous company now that they’ve had an opening that’s…not near me but not worse than last year?

And there have been tears.

My friend Ebony works in a preschool. Her school isn’t public so she’s been at work this whole time. Things have been rough on her. We have texted dailyl

One thing I’ve been able to feel great about is that I finished a surprise gift for Ebony and sent it to her home..and she got it and cried.

This is what we do now, we cry. We all cry a lot because there’s just so much to be overwhelmed by.

This is what she opened:

That’s a Frankie Stien Monster High doll as Sally from The Nightmare Before Christmas…but I think you knew that.

The process started before I had an airbrush so I had to sand and build up the color of the doll (Frankie is more light greenish blue than blue) with chalk pastels and layers of fixative. And then I had to pencil in her seams.

You can see the color difference clearing in this shot of the finished body and the head (uncolored) after I’d rooted it with brushed acrylic yarn. 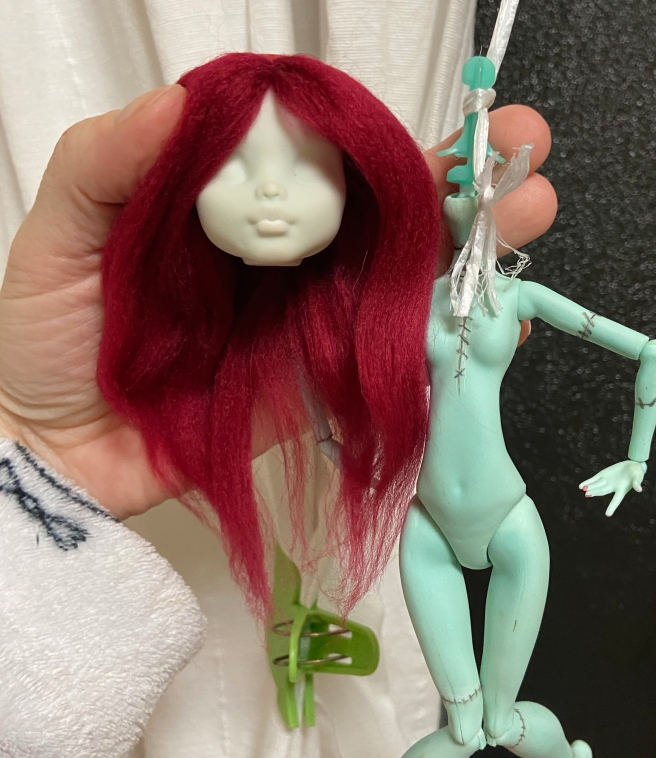 But this time I had an airbrush to get the base color down for the face before painting. 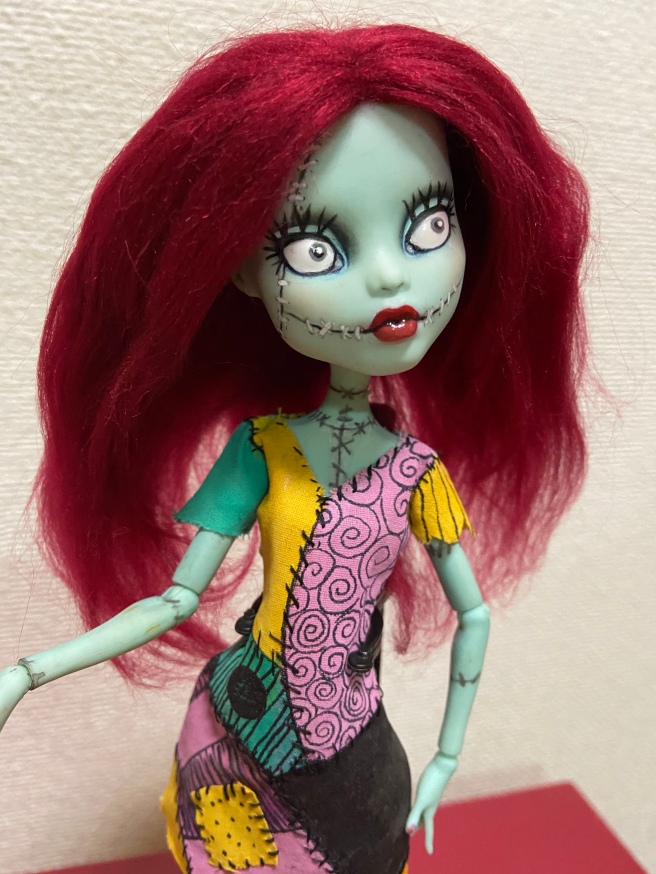 With the dress, this was my first time using acrylic paints, thinned with a textile medium, to create the whole dress pattern.

I made a base dress from white cotton. Then I painted in the color patches. Once dried I used a permanent fine-line marker for details. Finally I over-stitched sections with black thread and added a stitched on patch for depth.

For all the turmoil…and stillness…the last few weeks have contained…I have brought some joy to someone.

I have also been making progress in organizing my projects, tasks, life and daily needs in a bullet journal….figuring that a system developed by a designer with ADHD might be a good fit for me, and so far it is.

Tonight, I get to rest. Knowing that I do have a job come April…I really do..so long as school is a thing. If school isn’t a thing for a while, I have a safety net.

There is much to worry about…but I’m getting out of bed everyday and doing…somethings. I hope you are too.

2 thoughts on “Sally and the bumpy ride.”