It was about a year ago I brought home a Living Dead Doll, Hush, from my local Hobby Off and opened her baggie to be assaulted with the stench of nicotine. I wrote about scrubbing and scrubbing to remove the nicotine stains. 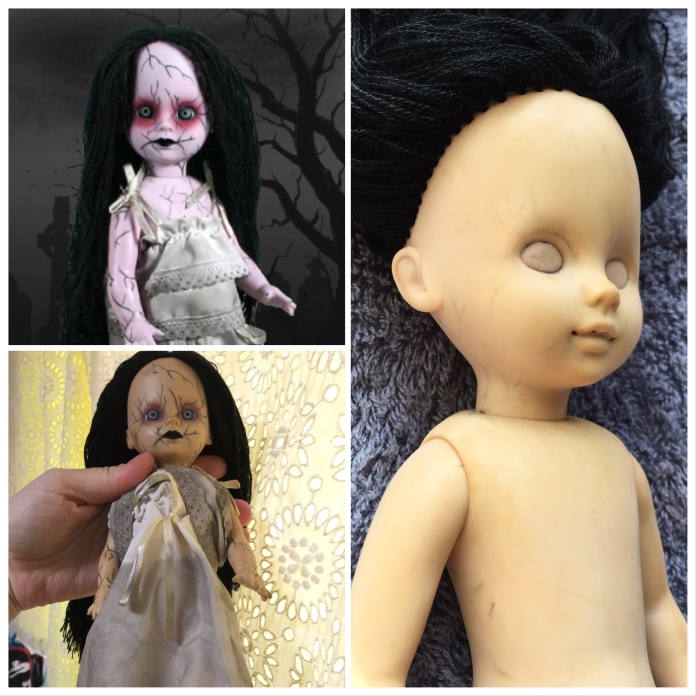 Eventually I got her down to an ivory white. She’d never be the same pink as her unexposed vinyl but it was good enough…then I waited for inspiration. She came to me in the form of Little Miss Muffet.

Little Miss Muffet was never actually made by Mezco Toyz, unlike Little Bo Creep. What struck me about her was that she was dressed like me. Maybe not the make-up and the tiny tie but everything else looked like it could have come from my closet.

I decided to make me.

Hush’s hair was string and smelled. It had to go. I started re-rooting her with strands of red and brown 100¥ shop acrylic yarn until I had a version of my bangs/fringe and ponytail.

In the last year I have discovered the wonder of buying glasses on-line. I’ve worn glasses since third-grade and needed them even earlier than that. Contacts aren’t easy for me to wear. Hard/semi-permeable contacts can handle my stigmatism but have caused scratches and pains in the past. Two week disposables can mostly handle my stigmatism but not perfectly and my eyes get itchy..I wear them for dance performances and little else.

For years buying good frames with the latest “as thin and humanly possible” lenses mean spending high hundreds of dollars…so I’d stick with the same frames for 4-6 years. Now for the first time I have one “safe/formal” pair of lenses that looks like my last pair (but with updated prescription) and two rather cartoonish over-sized frames…like the ones pictured above. My me would need glasses.

I had seen some doll sized glasses in a gochagocha machine a few months back and went to Akihabara and on Mercari to score some being resold. 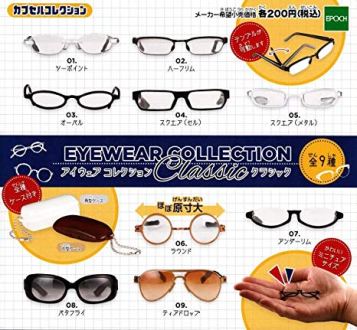 Now, my doll has three pairs to choose from as well. the arms of the frames were too long so I had to snip them, drill to insert wire into the ends of the arms, and create newer “ear loops” with Apoxi sculpt….which I don’t appear to have photographed.

I’m glad I found oversized frames for her. I’ve drawn a cartoon version of myself with over-sized lenses since mid-college. Without the frames her face looks a little too sweet.

That’s one of the huge takeaways I’ve had with this. Remove the make-up from your average Living Dead Doll sculpt and it’s a very traditional looking base.

Face almost finished it was time to dress me up!

Someone in a doll customizing group suggested that 1/6 Yo-SD shoes would work for LDD dolls. So when I found these…which are nearly identical to a pair I wore in late college (except mine had a pink nose and pink inner ears) I bought them 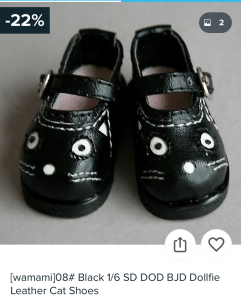 I found a free pattern on Ravelry for “Raglan Sleeve Doll Sweater for 10″ Ann Estelle” which worked for LDD dolls and knit two sweaters, one in black and one in burgundy.

I found a free sewing pattern for a simple a-line (reversable) dress on-line.

Last I made her a skull skirt (no pattern because I had to pleat to the specifics of the fabric print I was using) and modified a houndsouth skirt I had in my stash to fit her. 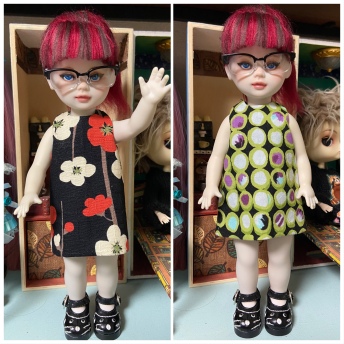 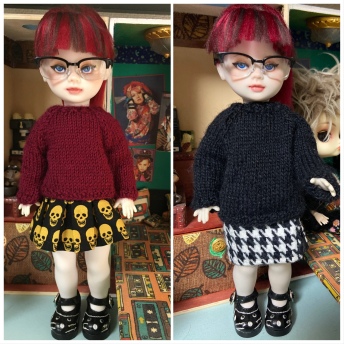 I know it was a success because when I sent my friend the above photo, without context on what I was going for, I received back a string of shocked LINE sticker and “It’s YOU!”

She even has a hedgehog!

And, last, here we are posing together…with the other oversized frames I bought. 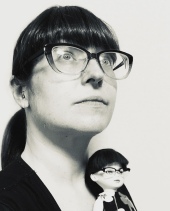 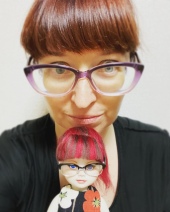 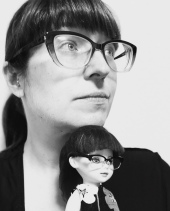 So now I have two me-like dolls. Little Me and my first Pullip face-up.

And I suspect when singing Anna from Frozen 2 starts showing up in thrift markets…I shall make another me.