Ebony and I visited Dollyterria again during one of our Ikebukuro meet ups in July. Again, I came home with a new friend.

Dal Lipoca is a 2008 Groove doll release. She retails new/mint condition for about 100USD/10,000¥. My Lipoca was around 3,000. Dolly in a baggie deals! She was FILTHY. She obviously lived with a smoker. Her white jumpsuit was brown. Her hands were stained. She smelled. She was missing her pitchfork. 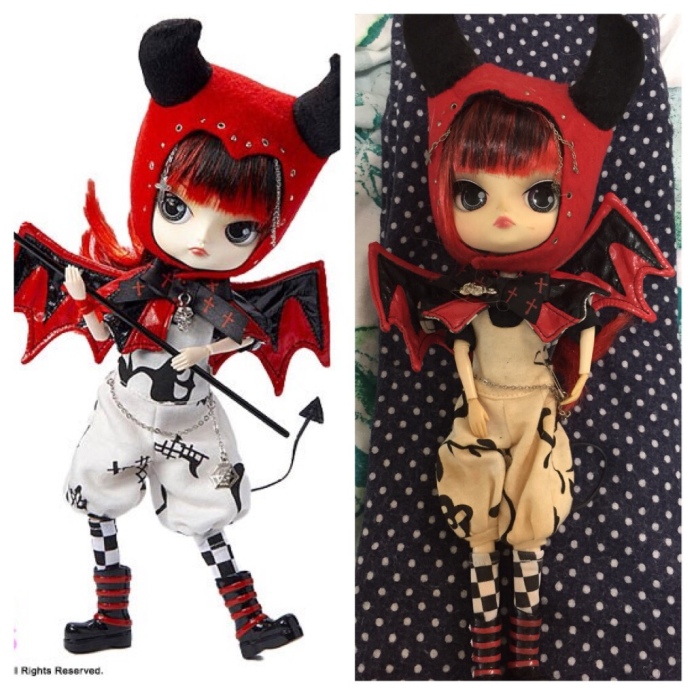 Who amongst us hasn’t seen some rough times in the last ten years? Some of us just hide it better than others. MINE!

I hand washed everything. The jumpsuit will never be 100% white again. I’ve tried. Her wings molted a bit but they’re good enough for now or until I feel like replicating them. When I eventually copy them, expect that half my doll crew will be sporting wings.

The original wig suited her so I pried it off and washed it (shampoo) and conditioned it (fabric softener) and let it dry on my makeshift wig head (styrofoam ball from 100¥ shop of a plastic bottle. I liked her face and eyes as is, no repainting.

Then it was time to scrub the body. I had some leftover arms from when I replaced Monomono/Bedhead’s body that I swapped in because her hands were permanently tabacco stained.

Here’s a photo of the face with just a quick localized soapy wipe on one cheek.

I disassembled her and washed everything. EVERYTHING.

I’m not against doll nudity but I feel better if the dolls in my room have some sort of clothing prior to their final outfits. You can just tell she has no love for the extra Barbie Gear in my stash. Dal dolls are petulant 24/7.

I found some black fabric with a. red and white lipstick motif…left overs from making to Moana Wrap Dresses. I stitched her a quick skirt to replace the jumpsuit she’d word. I then returned her original outfit to her, minus jumper, and plus a skull hair ribbon. I do love her devil hat…but the others are taking turns with it…and I was drafting some new headwear based on it.

She’s now joined the crew and can usually be found with a coffee mug and one of the many coffee tables I’ve set up. 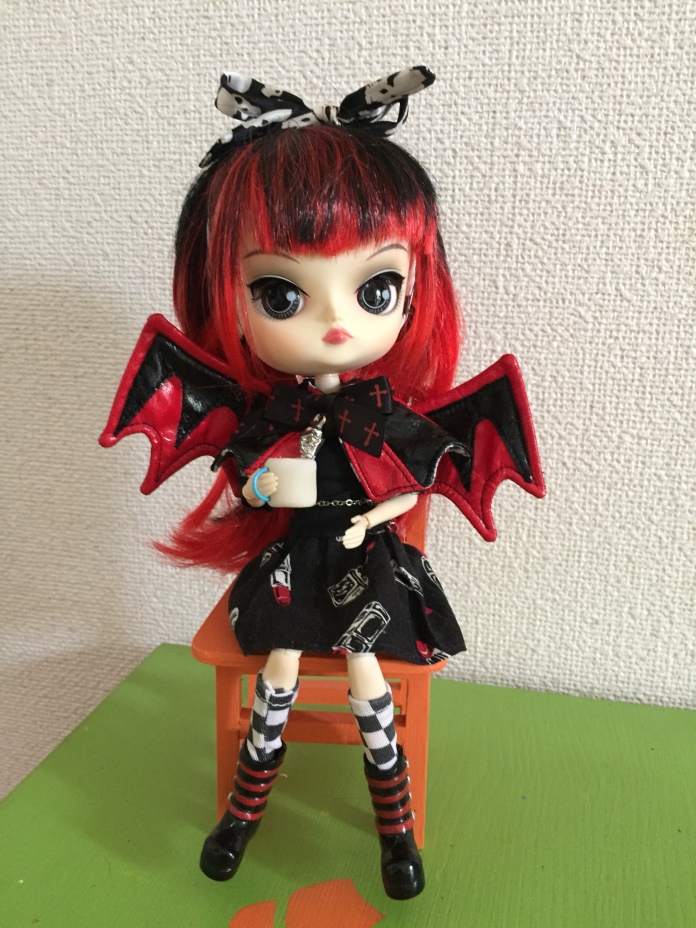 A friend recently remarked on how she never expected to envy the clothing of dolls…she’d always thought them too…something….but that it did make sense that my dolls would reflect style.

They do, they reflect my style and my life. Which is why I now have a collection of coffee mugs, a few beer glasses, and chairs and tables for my growing collection.