I visited America for two weeks this summer, hitting Maryland/Virginia/Pennsylvania for the first time in 18+ years.

I don’t have a car in Japan. I don’t need or want one here. I only drive in America. Usually I visit my hometown, where I can borrow a car. I’ve also visited cities with good enough transportation options and friends….but this trip I needed to rent a car.

How I got to this age never renting a car, I don’t know. I asked for advice and was told “reserve the smallest possible car. They will try to up-sell you once you’re in front of them. Often they won’t even have that car, it’s just to lure you in…but keep saying you want that car. You’ll generally get a nicer/larger car for the same price if you don’t back down.

Well, that’s what I did. I also requested GPS because I ready don’t need to make my once-a-year skill use more complicated.

My friend Brad took me to the car rental office my first full day in America. The man behind the desk was a sweetie and liked my homemade skull dress. He said he could go locate a GPS system for the car I asked for (a clip-in one) or rent me a larger car with one built-in for the same price.

This is how I came to be driving a Cadillac Escalade. A HUGE fucking car. HUGE. 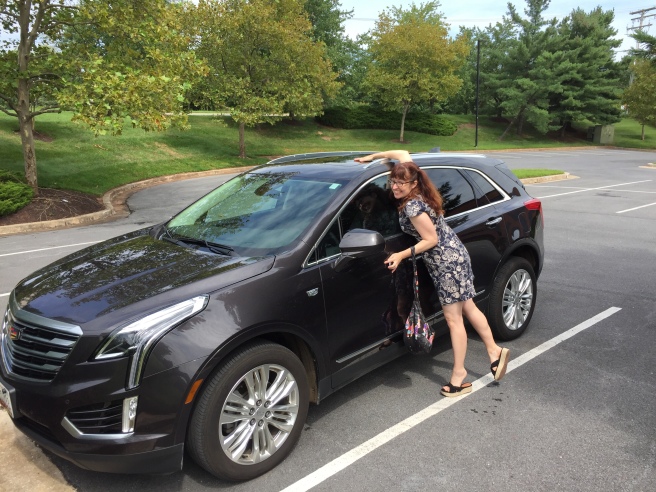 Brad was kind enough to take a test ride with me to a Denny’s first. I was yelling “omfg this is low key terrifying!!!!” most of the way. Brad helped me figure out all the extras the car had to make driving A HUGE FUCKING CAR easier (more sensors, things that light up when someone is in your blind spot, that kinda thing).

After that all my major drives to different cities became a GPS navigation to all Tuesday Morning stops between Point A to Point B.

I didn’t know what a Tuesday Morning store was when I bought my first used Pullip doll. Through YouTube Pullip Education sessions I soon learned that these odd stores occasionally have random Pullip dolls for 40-50usd….when they normally go for 100-200 new.

Now, that’s I all I knew. My first trip to a Tuesday Morning earlier this year, in my hometown, was creepy and I found no Pullips. Tuesday Morning is an “off-price retailer for close out merchandise” a grab bag of furniture, home goods, and a handful of random toys. You never know what you’re going to get.

I did find four different full sized Pullip/Dal/Tayangs on this trip but nothing grabbed me. I now have regrets. In fact the regret set in when I learned how expensive downtown Philadelphia parking was but by then I was at the end of my trip and far away from the Tuesday Mornings that I’d found treasure at.

I did buy one Mini-Pullip. I’ll rebody her in the future.

I was well into my habit of googling “Tuesday Morning near me” before any long drive by the time Rook and I went to pick Emily up from the Philadelphia airport. I informed Emily and Rook that our drive to where we were staying WOULD involve one Tuesday Morning stop on the way and that was non-negotiable. I then explained the above reasons.

This was how Emily found herself, a woman once afraid of dolls, buying toys.

Our first Tuesday Morning DID have a Taeyang I now regret not buying…but we didn’t leave empty handed.

First of all I took this photo. Y’all know Hippos are deadly, right? The Little People know.

Then I saw Tristesse.

I’m very upfront about being a depressive with anxiety issues who avails herself to prescription medication to stay moving forward. I have a special love for Sadness from Inside Out (Japanese title: Inside Head). The last Elementary school I worked at has a large poster of the character I painted for the English room. They also have a poster I painted of Bianca del Rio. 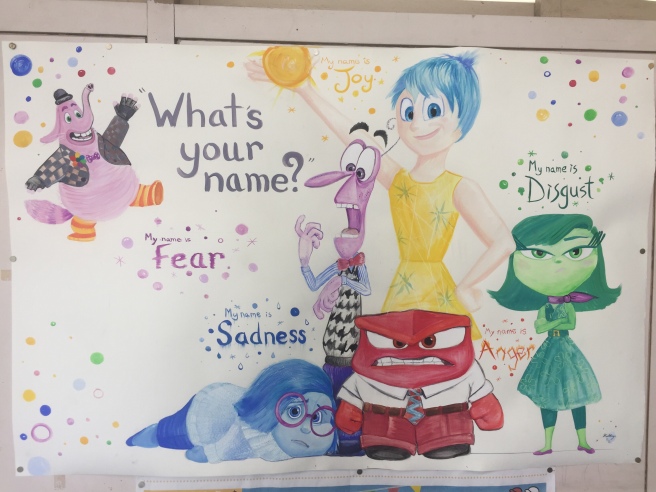 I had to have Sadness. Her action? Slumping in Sadness.

She was only 6$ or so. In part because the batteries inside her own head were now dead and when you pressed her slump button she only made a bug-like clicking noise.

I bought her and a Monster High doll to be customized later.

Emily bought a Stieff Dinosaur, a Malificent, and some assorted bugs.

Here we are feeding Tastykakes to our toys in bed. 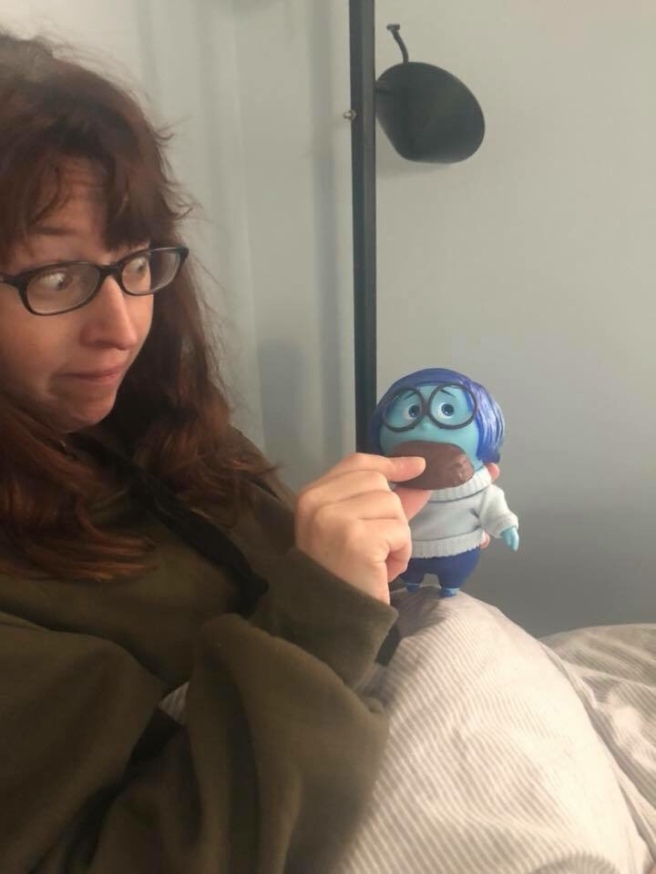 Here is Sadness trying to blend in. Relatable content.

But I’m never content to leave well enough alone. When I returned to Japan I figured out how to remove Sadness’s hair, unscrew her headplate, and replace her batteries. She now moans and says things like “Goodbye, friendship, Hello, loneliness” “I don’t think that will work” and “I’mSad” in English.

Then there was the matter of her sweater. It’s sweatshirt fabric seamed in many places and kept flipping awkwardly and showing the seams.

So I knit her a sweater from leftover yarn. It was the first time in a long time I knit without a pattern. She also tried on a beretthat one of my other dolls had been wearing. 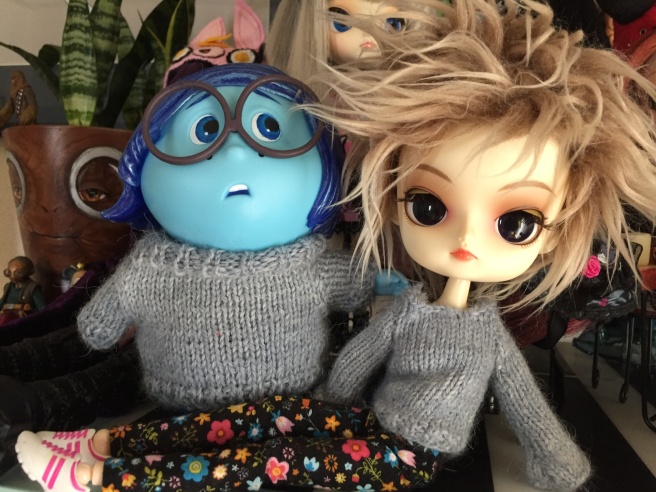 I’ve since gone on a felt beret spree, making berets with exposed seams and enclosed seams. I figured she needed a proper blue beret for her active slumping. 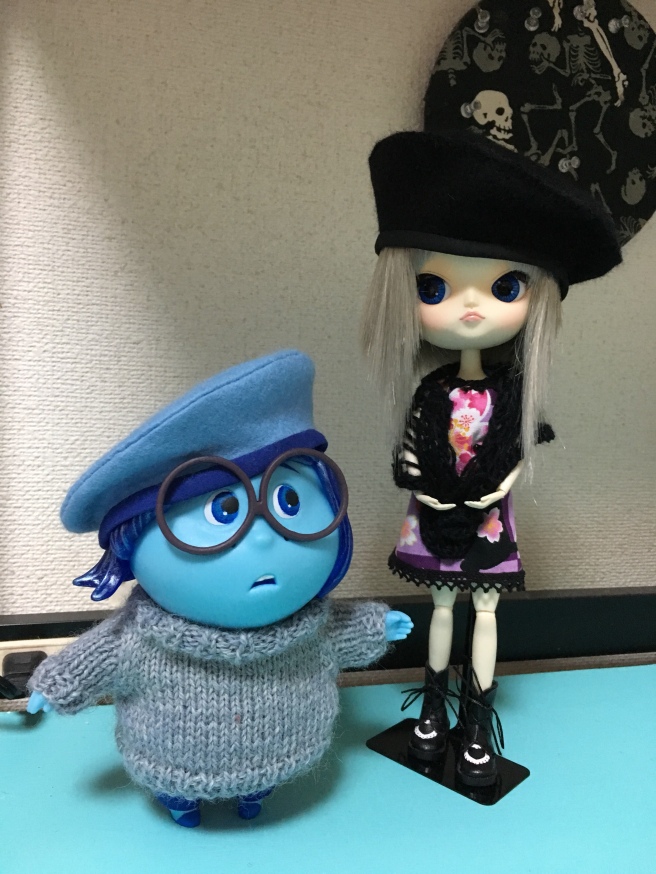 The Sadness figure comes with a fake book. My next plans are to cover that fake book with a Sartre cover and sew a tote bag for her book. Maybe I’ll even make some tiny medicine blister packs to slip into the tote with her reading.

After all, Sadness relies on a the Inside Out team to balance her out…and I rely on modern medicine to be able to better access my full emotional range, despite sadness always being an integral part of who I am.