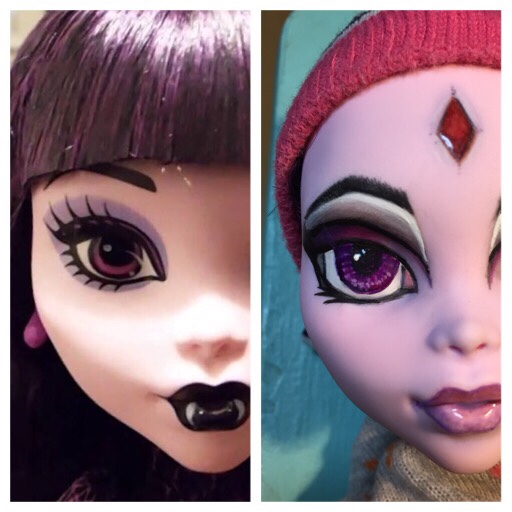 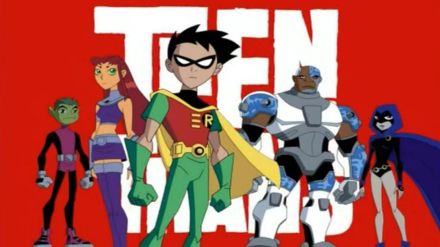 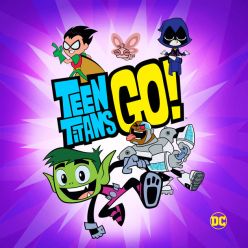 When I visited the homeland, Madison, Wi, this spring I had my eye out for adorable Raven merch. There was a lot but I didn’t LOVE anything.

Then my doll clothing and stuff hookup showed me an oversized Monster High doll with great articulation and said, “the first one’s free.” 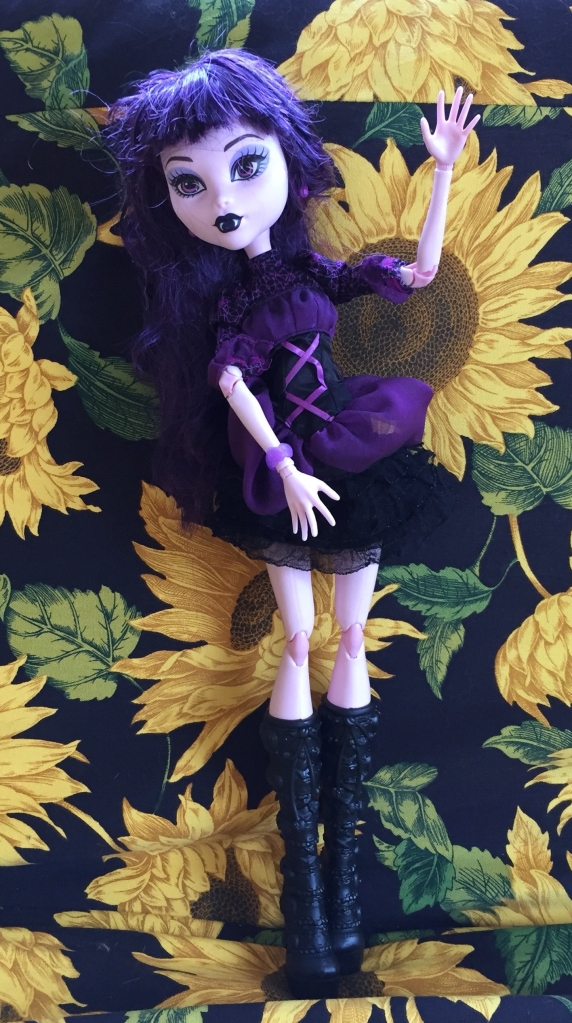 Nah, they’re all free. That’s why I don’t share my hookup with the world.

Along with all that doll clothing, some free wigs, and a few MTM Barbies I’d bought, I brought back a 14”/ 35cm Monster High doll…technically a Frightfully Tall Ghoul! Elisabat!

I didn’t know what I’d do with her…and then I watched even more Teen Titans Go and knew…I needed to make my Raven doll.

Did Elissabat have the grayish hue of cartoon Raven? No. But Comic Raven didn’t either so I didn’t care. She was alien enough with purple/pink skin. Would it be exact? Nope. My Raven, my rules. I just wanted a Raven doll that would please me.

First, I swaddled Soon-to-be-Raven in an arm cover (what Japanese ladies wear to protect their arms from the sun) and a hair sock. Then, I removed her face with acetone. Finally I primed her face with Mr. Super Clear. 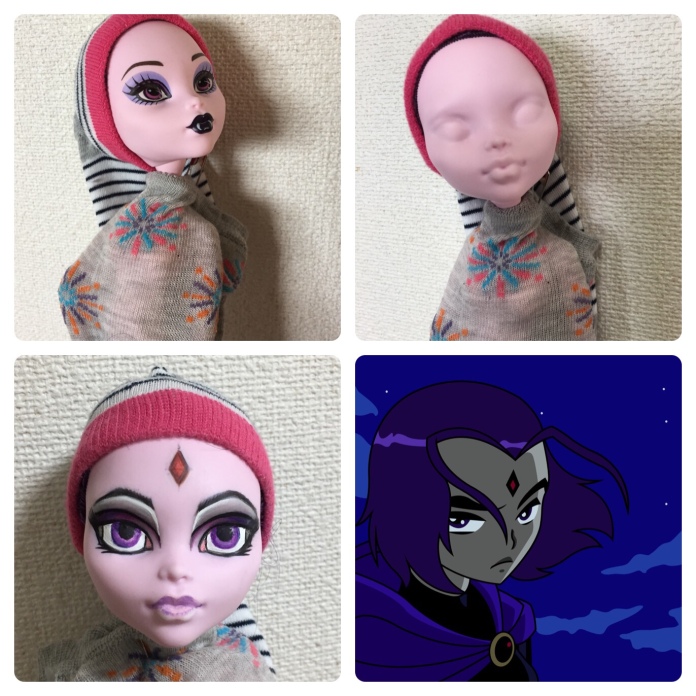 I built up her new face with layers of chalk pastels/ watercolor pencils/ and acrylics. I’ve seen a lot of Raven cosplayers go for a dramatic purple lip. Now, I love wearing a purple lip. It’s an easy quick look. BAM! My deep purple lips are distracting you from the fact I’ve done next to nothing else with my face! But Raven’s dramatic impact point for me has been her eyes and her lips seem to be downplayed. I wanted a more muted, almost nude, look for her lips in contrast to eyes that would make Souxie proud. 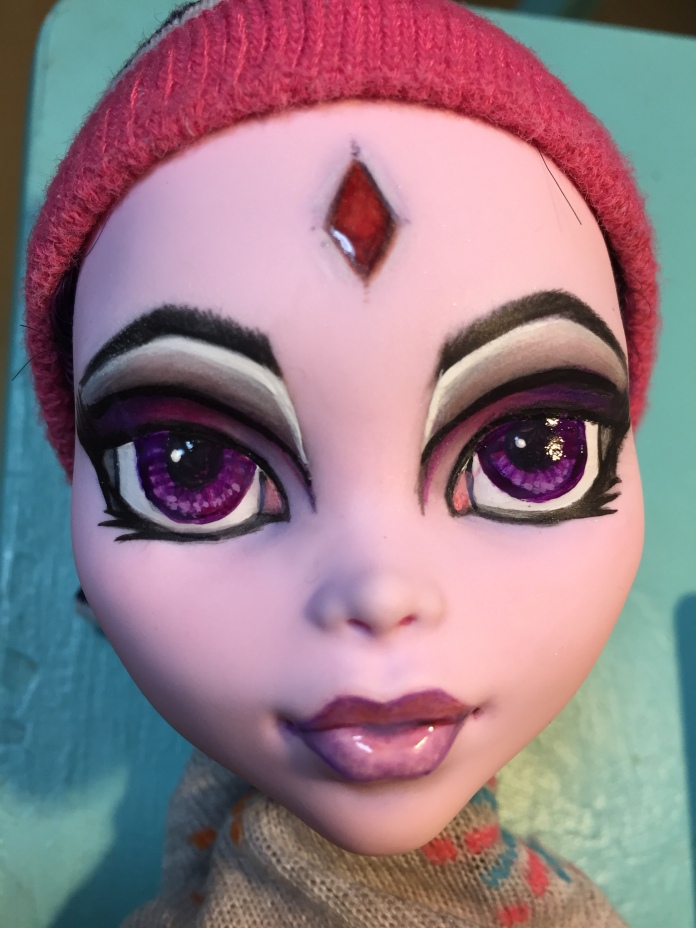 Then came making her outfit. I decided that I don’t care that Raven doesn’t wear black boots with black ribbons and black hearts on them. There aren’t a lot of Frightfully Tall Ghouls to swipe boots from. They looked cool enough. Maybe someday I’ll be bothered but not today. Besides, I think the fold-down boot top with an accent color is a bit too super-cheesy for me. 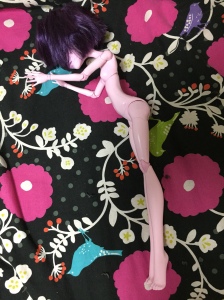 There was no way I was going to try and make a one-piece sleeved swimsuit top. Elissabat’s original dress solved the problem of sleeves by having the top be a fitted jacket/bolero over a dress.

I did the same. With some think black spandex I put a knitfabric needle in my machine and went to work, first making a swimsuit with black elastic straps and then making a top that closed with Velcro in back. 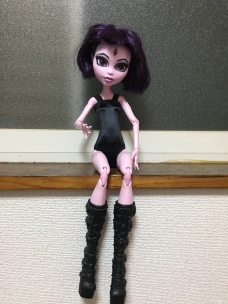 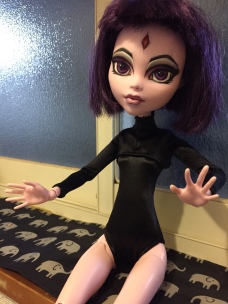 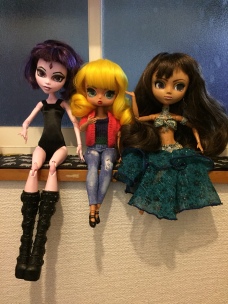 Then the cloak. Comic book Raven generally has dark blue as her accent color…and I think as a child I had one isolated comic issue with Raven and teen-space-drama that I somehow filled in the blanks for what happened before and after…but I fell for Teen Titans Go Raven HARD so purple it was.

But first, some coffee….I know Raven drinks tea but this is MY Raven and MY head cannon. 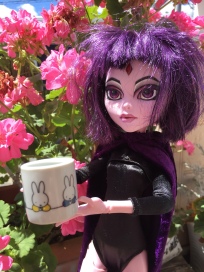 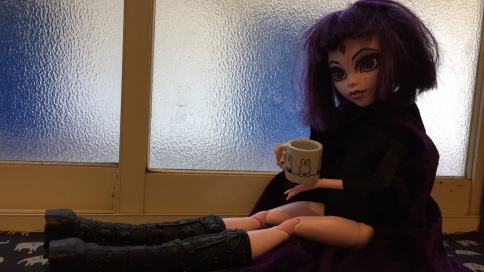 CAPE! Is purple crushed velvet tacky? Yes. Did I choose it? Yes. I could have gone with a thick satin but that can fray when you’re working with it and be slippery to stitch (trust me, Bellydance Costumes…lots of satin of varying quality) and I wanted clean edges without lining the whole cape. 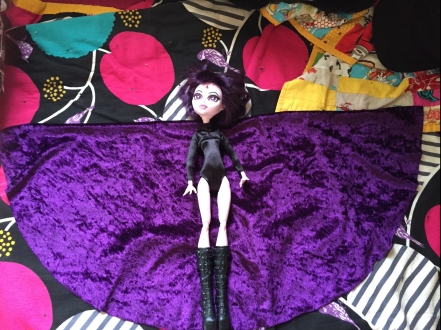 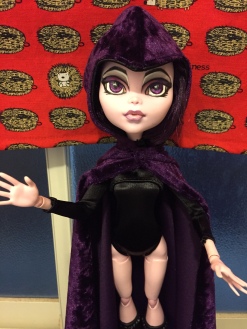 The shape was easy, half circle cape plus a hood shape with triangular extension of the front of the hood to make the Raven Bill shape. I lined the hood with left-over black spandex, to give it slightly more shape, and left the cape unlined so it wasn’t too heavy.

Then I turned to air dry plasticine clay for the accessories. I had hoped to find jewelry fittings and stones for Raven’s belt (belt, not built in swimsuit accents) and such but nothing was right. I don’t think I’ve used Sculpty or anything similar for 20+ years…and I never loved it. Yet, there I was in a craft store looking at air-dry clays (in a second language) and I figured I’d just use it to make the parts.

I’d say it was 70% successful. I joined everything with jump rings for the belt or stitching for fabric. I painted a Raven onto the accessory for her cape closure. 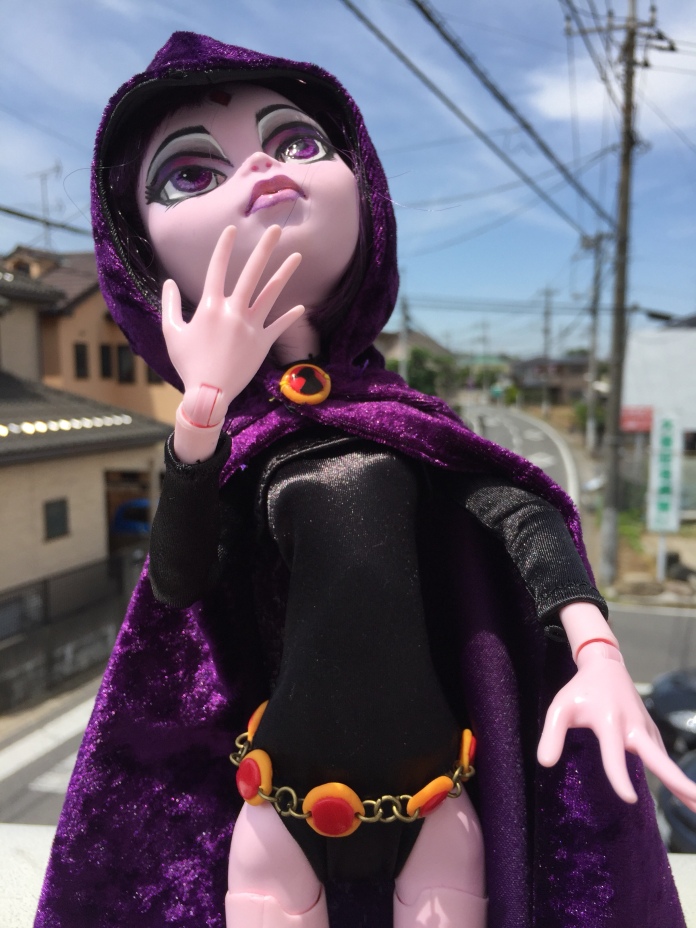 I could have left it there but Raven usually has…hand-gauntlet jewel thingies. I made fingerless gloves with (cheesy) purple trim. I don’t love them but I don’t hate them. 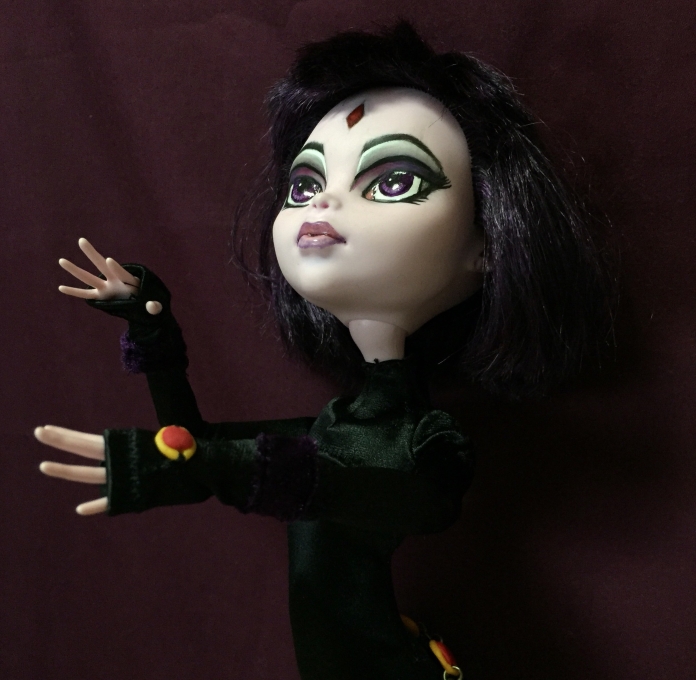 I do love Raven now.

I finished Raven on a rainy day, thus the dark photo with a pillowcase background. Today after getting home from work I ran around the neighborhood taking some photos.

HI! Nothing to see here! Just a gaijin girl with a doll taking pictures in your shrubbery!

I wish I’d reviewed the images more as I took them (belt flip! but that can be edited in photoshop if I want to or if someone wants to do it for me …(wink)) unfortunately an old man and his dog took to following me around so I felt a little more rushed and absurd than I might normally on my first street shoot with doll. 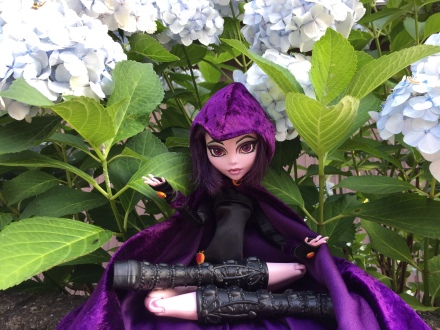 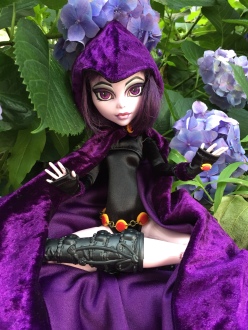 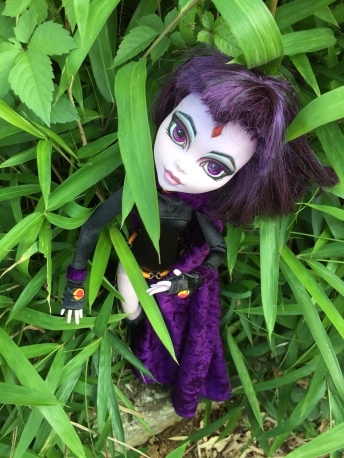 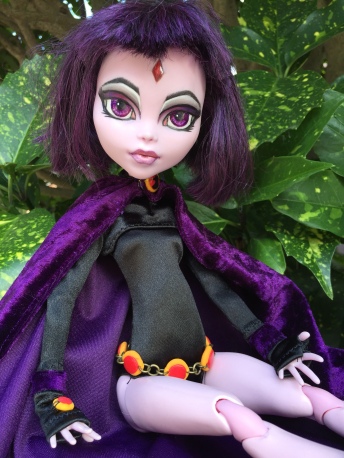 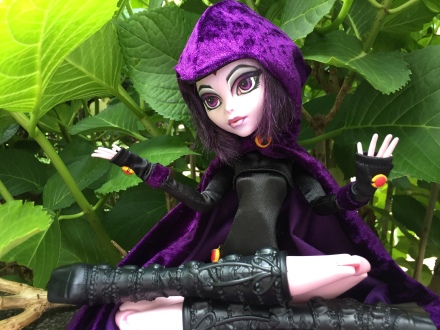 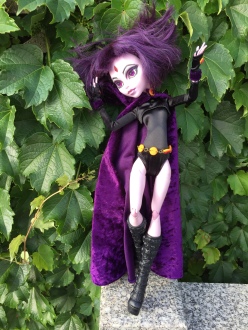 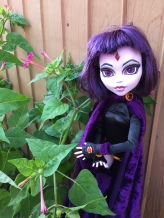 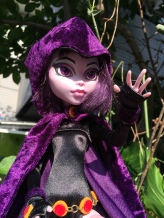 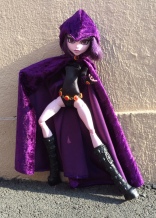 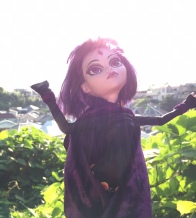 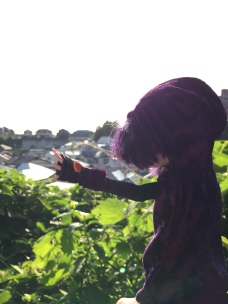 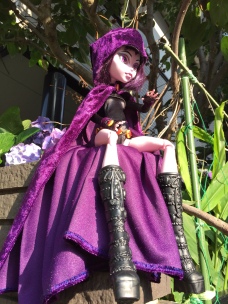 One thought on “Frightfully Tall RAVEN”