Today I don’t just mean restorative to indicate fixing up a damaged or sub-par doll. I also mean crafting to put your heart and mind back together. Sometimes the hyperfocus of making something with your hands is a way of stepping back from the horrors filling your life.

Today I’m not going to get into the horrors at length. Suffice to say that someone in our lives wasn’t just revealed to be a liar: she’s a full-time con artist who can turn violent and rips lives apart. It’s an ongoing thing.

There’s information APLENTY on Facebook (and some on twitter) under the hashtag #sabrinataylorscams . If you check it out, I’m Kathryn. Sabrina the scammer (@realafterglow) is here and there on this blog as the friend I crafted a doll kimono for and more.

While things were falling apart here in Japan, my friend Randy and I took a brief trip to Akihabara when we knew Sabrina would be occupied and we wouldn’t have to risk  seeing her in person prior to the lot of us going public with what we’d learned.

At Akihabara I found a Jack Skellington doll, in box, for under 300¥. Dirt cheap. Ebony, who was also going through this crisis and more LOVES the nightmare before Christmas.  She needed Jack

Why was Jack cheap? I wondered, in the dim shop.

His face had, perhaps due to shoddy construction and the viewing window on his box, yellowed and developed mold. MY KIND OF PROJECT. I’d later learn that the face was also sorta slimy.

When I got him home I removed the shrink wrap and such and popped Jack’s greazy head off, easy peasy. I washed it and then primed in with Mr. Super Clear. Over the next week I built up layer after layer of acrylics on his face until I was happy.

I shared pictures with Ebony of the process. She’d also bought me a hedgehog/sewing themed hand towel. It’s Japan. That sort of match-up isn’t surprising. 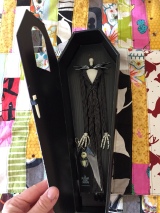 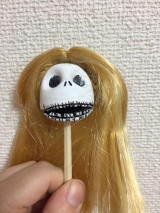 Today I’ll be heading to Ebony’s place with Jack.  I checked how the new head would look next to the body. That’s when I noticed his shirt was similarly nasty and discolored. I bought some felt with adhesive on one side. I stripped the old shirtfront off and cleaned the plastic underneath. Then I used the old shirtfront as a pattern. 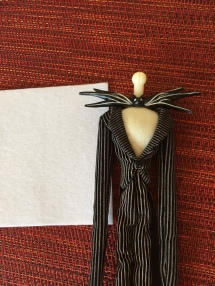 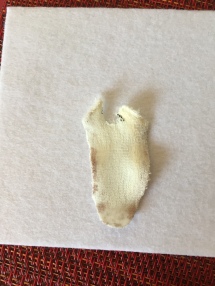 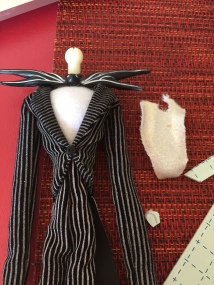 After sealing his head with more Mr. Super Clear he was ready for a few photos.