What have I learned?

Carefully layer the fixative spray, let it fully dry, and paint up the eyes and whites first.

Also, you can’t make the Archie doll look trustworthy. You can only raise his craftsmanship. He’ll always be eldritch. He might slice you where you sleep but he’ll do it with a better quality of shank.

He no longer stares straight at you.

But he now looks like he’s spotted the two Archies standing just outside of your view. And that’s when the attack comes. Not from the front, but from the side, from the other two Archies you didn’t even know were there. Because Archie is a pack hunter, you see, he uses coordinated attack patterns and he is out in force today…

I finished his shirt yesterday. I do wish I’d actually focused and drafted his sleeves/shirt. I really just winged the whole shirt and had regrets later. I am happy that I had the leftover fabric for his bow tie.

I made him a whole new sweater as well, but that’s mostly because Snow looks so good in his original.  I might make her an Archie homage outfit.

It occurs to me that now I have dolls in different sizes this can be my crash course in how to adjust pattern sizes for different shaped people. I do get asked about if i can be commissioned to make dresses and costumes for people other than my self but I’ve stuck to costumes for people around my size who live locally (so I can do fittings) instead of learning more about adjusting and scaling patterns. 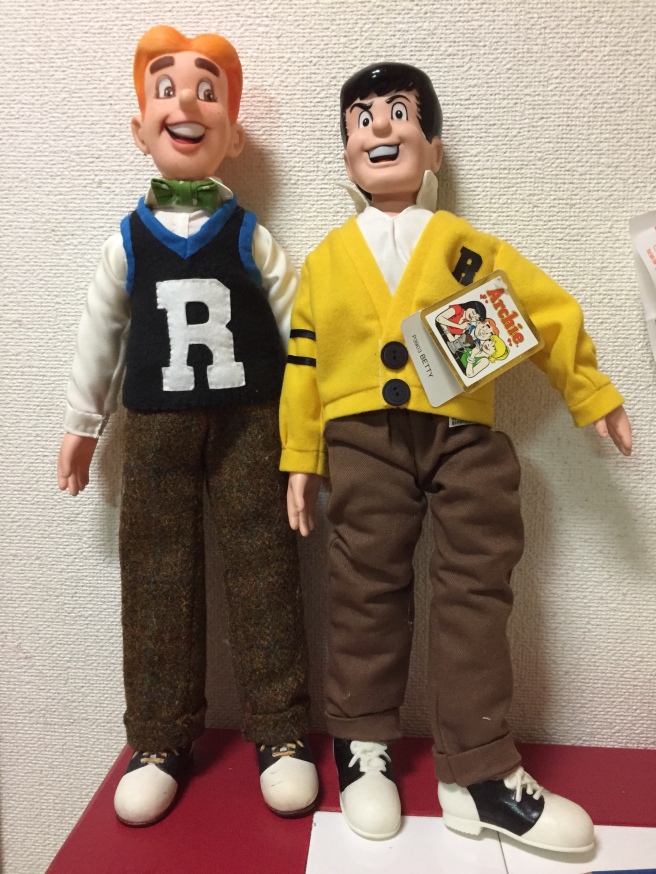 Or maybe I’ll throw him in a box, tie it with chains, and hope I never hear any strange noises coming from it.

Who am I kidding…I’ll hear those noises…those low, dull, quick sounds, such as a watch makes when enveloped in cotton. I know the sound well, too. The beating of the old doll’s rage…Reggie…the other terror.

3 thoughts on “Terror’s make-over is complete.”