Who Benefits from all of this doll clothing? 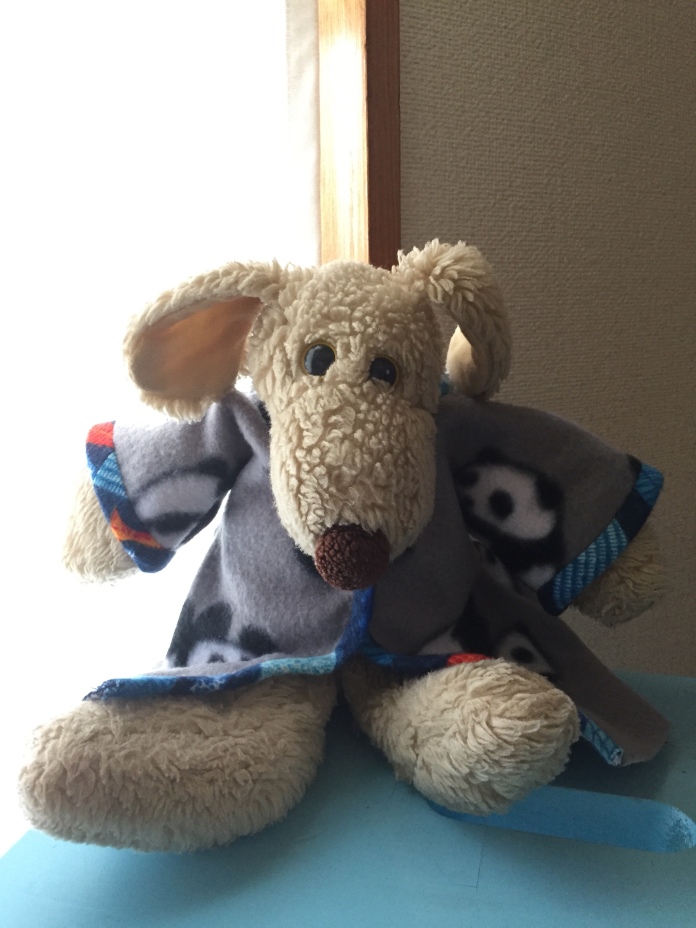 Meet Ralph Waldo Le Mutt, I’ve known him since I was in elementary school. 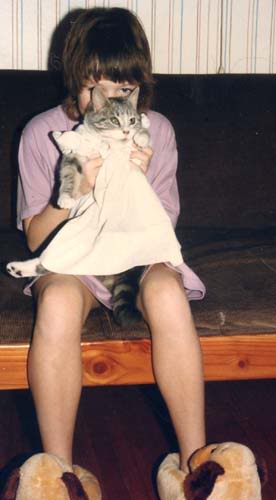 Year one of Cindy, who spent 23 years outliving all other pets.

Ralph Waldo Le Mutt (the stuffed dog ) joined our family shortly after Martha  and real-life-dog Ralph moved out, probably around the time I took over the basement room..3rd grade? 4th grade?

In a time when Pound Puppies (the stuffed animals, prior to the cartoons) became popular, Ralph was a found puppy. 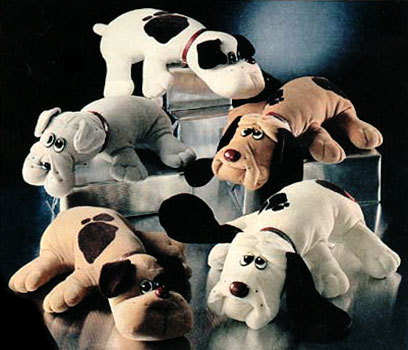 My mother and I would, in the summer, spend a week in northern Wisconsin in a rented cabin near a lake in Mercer, Wisconsin. Nothing fancy, as I remember, just a large room containing a kitchen/dining table/two beds and additional room with a bathroom…and maybe a cupboard of extra supplies.

Mercer is HOME OF THE LOONS, those B&W low-riding ducks who sound like a haunting.

For that week we’d swim, row or canoe, and relax. Maybe we’d drive to see a movie in my mom’s tiny blue Chevrolette or go to a camp-site to make a campfire.

Ralph was found, forgotten and muddy, at such a camp-site. We brought him back to the cabin, washed him, and he’s been mine ever since.

An elementary school friend of mine, Katy T I think, had the female version of Ralph (it had the same Le Mutt tag) and they would play together. Hers was fluffy while mine was always soft but matted in the way that certain stuffed animals never quite recover from being washed.

I think Ralph came with me to college. I think he moved with me to Virginia after college and then back to my hometown when I returned to live with my mom and figure things out.

He didn’t move with me to Japan 16 years ago but he’s here now.. and he has a polar fleece Mary Frances styled bathrobe made.

You see, I live slightly North East of Tokyo. I was affected, though not nearly as badly as others*, by the March 11th 2011 Tohoku earthquake and the Fukushima Nuclear Power aftermath that went with it. It was a traumatic time, for a while I was in my apartment, alone..then in Tokyo with my friend Jo and her son, then in Nagoya with friends, a cat, and a ticket for a three day vacation in Taiwan I’d purchased a month before…then in the boonies of Taiwan with a friend for much longer than those 3 days.

I had not returned to America during any of this.

By April 2011 I was back in my apartment, back to work, checking soil and water information. By mid-April my area’s status as being an anomaly “hot-spot” where ash had affected the topsoil was known and water had iffy days. And my mother had tickets to come see me. To see for herself that I was relatively ok and my location was relatively ok and to see me because. Because.

Note: I am an only child.

Her friends constantly asked her why “She let me stay here”…as if I’m not the stubborn daughter of stubborn parents and controlling WHERE I lived was feasable.

It was a rough trip for both of us. We were both brittle and confused, broken and scared.We get along very well but one breakfast we both managed to say things that left us both in tears. We’re both adept with words and painfully so when we’re feeling hurt…we can cut deep and quickly…so we cried and apologized and recovered.

The trip is mentioned because my mom had no idea what to bring. What do you get the daughter whose circumstances have shaken you to the core and kept you awake for months?

You bring her Ralph. Because you don’t know what else to bring.

Last March my mom visited. We went down to Kamakura and spent one day going up and down the mountain at Enoshima Island. That morning we’d left out hotel without breakfast and found ourselves at the base of the island mountain hungry and with few options of where we could eat.

We ended up at a Hello Kitty cafe. Each table had a giant Kitty-Chan to sit with. Some women came in small groups, some women came solo and sat with Kitty, and we followed.

The following morning, back at my apartment, I awoke and found Ralph seated at my small kitchen table. Mom had set him there to make up for the lack of a GIANT KITTY-CHAN lest I experience a sense of loss.

One thought on “Ralph”