Other than the Archie and Reggie dolls of doom, I didn’t own any dolls when I embarked on this project

Our Riverdale boys are not the right size and shape for Mary Frances patterns…but you know I’ll probably kit them out by the end of this.

I know NOTHING of doll people, although some of my friends are doll enthusiasts. I’ve been told that Ball-Joint-Doll forums can be a source of intense online drama. I know that by living in Japan I am in the heart of obsessive  doll collectors and modifiers who can be…intense. I’ve seen a grown man on a date with a small doll at a maid cafe.

I began to search online for 16-inch dolls. Then I screamed a little bit. 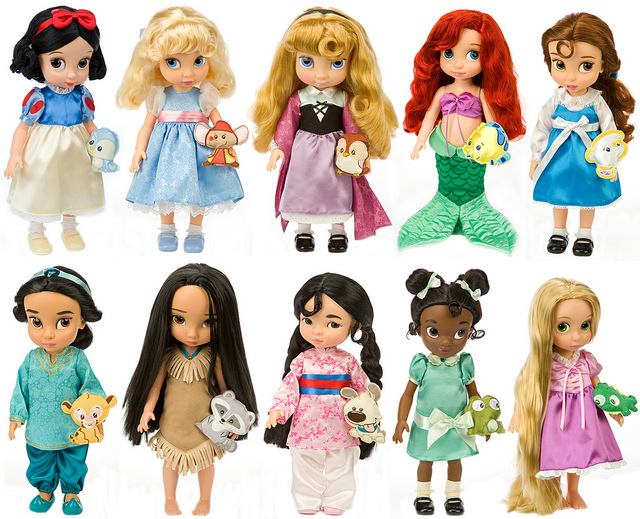 I quickly scurried to FB to make sure my friend, Realafterglow, had seen Tiana. She and I recently went to Disney Sea and Disney Land together and had been having long talks about what characters are barely ever seen in the merch shops; Tiana, Mulan, Pocahatas, Lilo.

Realafterglow informed me that she’d purchased a Tiana for her niece’s upcoming Christmas gift. This finalized my choice. Disney Animators it was! I could be available for custom doll clothing making for AfterGlow and my other friend’s doll needs.

Then it was time to purchase a doll. I was most interested in the Mulan, Jasmine and Pocahontas dolls. I’ve never even SEEN Pocahontas the movie but the doll looks VERY disappointed it you. The online prices were high and those specific characters were scarce here.

I headed to see what my local Hobby Off had. Hobby Off, Book Off and Hard Off are a chain of Japanese second-hand stores (toys/geek stuff, books and manga, household goods respectively). I’ve got an impressively stocked on nearby where I’ve found specific Sailor Moon stuff Realafterglow had been hunting.

They had a few in-box dolls and none out of boxes…all blonde (Rapunzel, Elsa, Alice) and one Snow White. I love Alice in Wonderland but the doll felt generic and blonde to me. I don’t intend to add to the global economic demand of blonde white dolls. Sure, I brought home a dark haired white doll instead so I’m not exactly challenging any norms but Snow has a place in my heart. My mother identified with her as a child….because she was the only Disney girl with dark hair and as an adult she used to think of the men she had to do exhausting contract negotiations with as little, tedious, dwarves. I buy my mother the occasional Snow White item the same way friends give me Alice gifts.

And thus I had a model. 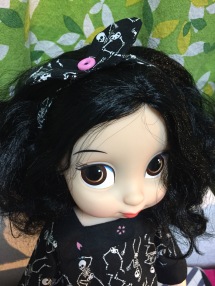 Here’s Snow in the first dress I made for her, The Mary Frances Morning Dress which I shall write of soon but not today…as this entry has grown longer than I expected.

….I should go dig up the story of the man on a date with a doll for you.