The first Thimble Person Mary meets is the Sewing Bird. Frankly, the sewing bird is the only character I’d want to encounter and even then the stilted rhymes would grind me down. You can see the Sewing Bird on the table in this illustration…it’s the only thimble person on whom eyes make sense. The rest are pure abominations.

Dick, a real bird, is in the background. Sewing Bird sometimes taunts Dick but who doesn’t?

“I mean sew With a thimble;

I mean sew And be nimble,

To baste and bind; tie a bow;

‘Dress a dolly, head to toe,

We can teach you how—”

Sewing Birds, first patented by Charles Waterman in 1853, were clamped onto table edges and their beaks held tight to fabric, allowing their users to pull the fabric tight with one hand and stitch with the other. Often they also featured pin-cushions on their backs and occasionally they had extra rods to hold the sewist’s thread spools. 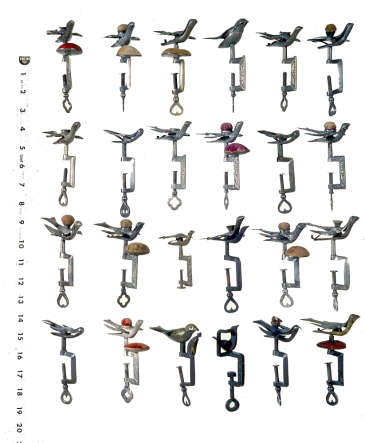 Aren’t they things of beauty?  They also came in other animal shapes.

Neither I, nor many of my sewing friends, knew of their existence despite having Grandmothers who were avid sewists… but I suspect the following explains why soon they vanished.

By 1915 ready-made clothing was readily available because advances in sewing machine technology and production made the machines affordable enough to be purchased in bulk for factories and poorer women. These changes shifted machines them from items of luxury to everyday machines. Other highly ornate sewing tools like silver filigree thimbles, exquisite sewing birds, and decorative scissors (once some of the only items wealthy women could hand down to daughters …as all belongings were thought to be the husbands and to be passed down to sons) also fell out of favor when sewing became less a gentile past-time and skill of wealthy women and more the burden of factory women and poor seamstresses.

Eventually home machines would be capable of having multiple stitch settings and interchangeable sewing feet. This also meant that a machine was capable of producing rolled hem edges and other delicate work that once required hand stitching with a sewing bird.

Adding to the decline of sewing birds would  be increases in ironing technology. With irons you could press a hem instead of needing to hand crease it and hold it taught with a sewing bird as you basted it. When the Mary Frances books were published irons were not yet a common household device, but they soon would be:

The Hotpoint iron, designed by Earl H. Richardson of Ontario, California, was launched in 1905, and was the first electric iron to have any commercial success. By the 1920s enough people had homes wired for electricity for electric clothes irons to spread fast across the US. They were also selling well in some parts of Europe. By 1932 17.5 percent of Swiss homes had one, more than in the US, according to Iván Berend in An Economic History of Twentieth-Century Europe.

From Old and Interesting; history of domestic paraphernalia

The need for sewing birds was diminished, but they were still manufactured as novelties. The Singer Sewing Machine Company produced a few as late as 1980.

So while I don’t have one, I do have the modern version of one… 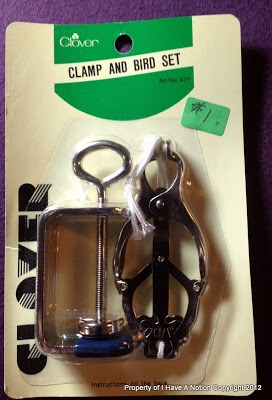 Although nowadays they’ve droped the bird from the name altogether and Clover simply calls it a Third Hand Clamp.

I use mine for occasionally hand stitching a rolled hem on silks or chiffon that needs to stay light and floating on costumes. Whenever I post a picture of it in use on my costume page I field questions from others who have been looking for something JUST LIKE IT.

But, alas, Mary’s first introduction to the Sewing Bird ends…as does ours, as Grandma comes home.

“Ah, my dear, you’ve not been lonely,” said Grandma—then discovering Sewing Bird on the table, “You’ve been playing with my old-fashioned sewing bird, I see. Many a year this pretty little beak has held Grandma’s long seams and hems while she sewed them.”

”I love her, too, dear,” said Grandma, a far-away look coming in her eyes.

”The first time she ever helped me,” she added softly, ”was with my wedding dress. Yes, I love her, too, dear.”‘\

Excerpt From: Fryer, Jane Eayre, 1876-. “The Mary Frances sewing book; or, Adventures among the thimble people.”