I’d been planning to write about Leah McSweeny and her behavior towards Michael Che and how it is some heady White Feminism…but then Mr. Whiney Dickshot Mc-doesn’t-learn-a-lesson (Mr.Chbr) updates were  on my FB feed and in my inbox. It’s now on hold.

Here’s our introduction to Mr.Chbr:

Update: Yesterday morning, Dancer A-for-Awesome contacted me to say  that she’d intended to let the subject drop and forget about him but he’s STILL contacting her. She sent me her previous screen shots of the first conversation she had with him(which I’ve added to the prior post about him). She added “And if you really want to torture yourself I’ll send the most recent ones as well.”

I probably don’t need the most recent ones because he’s been harassing other dancers who SHARED the original posts. A set of THOSE latest screenshots is being shared today on FB. That’s why I’m back here.

Let me remind you that the original posts were shared 300+ times before being removed by FB. They also caught the attention of Your Daily News AND Cheezeburger. He’s gotta be busy now if he’s in-boxing messaging everyone who shared it.

Here is what his latest behavior looks like. I’m sharing with permission of the person who received it. It is NOT the only exchange he’s had like this this week with a dancer. I’ll be commenting between screenshots because I have opinions. 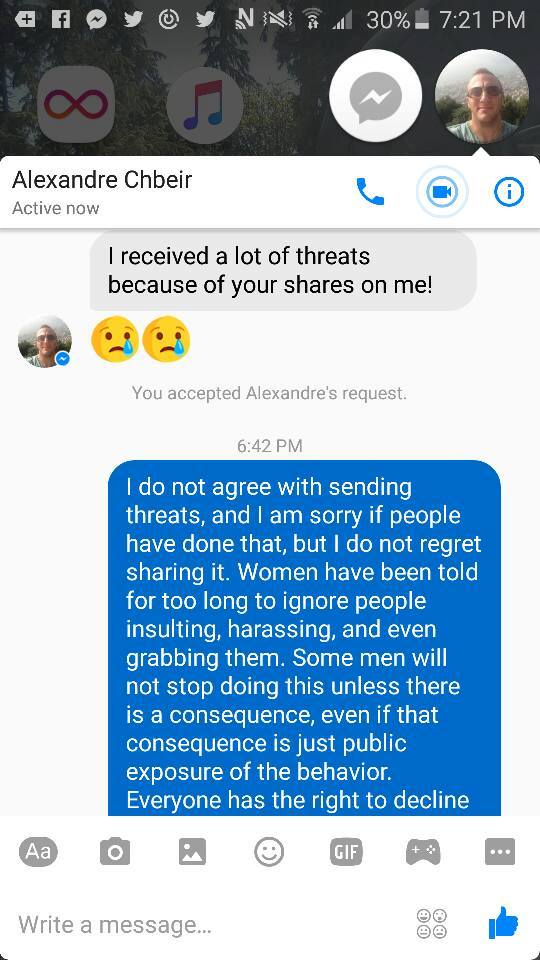 First let’s note that he continues to make this all about the impact on him. Get used to that because he’s not going to stop that.  Look how he frames it. Why does he say this is happening >to< him? Answer: Because women are sharing.

In his argument it’s NOT because he questions and harasses unknown women, calls them multiple times, and then gets angry at them when they don’t enjoy his attentions. This isn’t happening because sometimes he likes to show unsuspecting internet strangers his penis. Nope!  It’s happening because women share.

Let’s look at the woman in this latest exchange. In her response she says exactly why women are sharing the screenshots and I’ll restate that a few times… but let’s address the women who are blocking and ignoring him without sharing. I bet there are numbers of women who’ve done that to Mr.Chbr. That’s a sane thing to do. It’s smart thing to do if the person harassing you online might live close enough to you to escalate behavior if you piss them off.

Taking screenshots? That’s normal. Online harassment is one of those times that the people being harassed CAN easily keep track and share exactly what happened in case they need help…or just to double check with a friend “This is fucked up? Right? I’m not being crazy, right? Let me know if I’m overreacting” Screenshots are smart to do even when you’re going to follow up with blocking. Just. In. Case.

Why not just block? Mr. Chbr often wonders this. He’s not alone. I’m sure dudes wonder why this is happening to them.

Why show and tell? The answer is easy! She says it! I’ll say it! Let’s all say it!

It’s because there needs to be social consequences attached to bad behavior.

If harassers refuse to care/acknowledge how they are affecting other people then they need to be given another reason why NOT to harass. Social pushback from strangers, peers, friends, family is a way to get people to realize that their bad behavior towards others can impact their own lives.

It’s a way to say “if you wouldn’t corner a stranger and expose yourself to her in public then don’t do it on-line” because “don’t send dick pictures” isn’t working. Women are starting to SHARE the horrors of their inboxes with the world to reduce future cockfuckery.

Sir, Mr.Chbr, I’m talking to you. We’ve seen the screenshots. She gave you indications early on that she wasn’t interested. You could have even stopped the FIRST time you called her and she didn’t answer. You called 15 times, sir.  She didn’t make you call 15 times. You were in control of that.That’s harassment even before you started insulting her.

I saw those words when I dug into how Mr.Chbr harasses women online.

Note how quickly he  goes RIGHT BACK to insulting the woman who he harassed.

Mr.Chbr, I’m talking to you again:That angry behavior is what got you in trouble the first time and it’s why you’re still in trouble. STOP.

That’s why more and more people are naming and shaming to make the daily cockfuckery stop.

Life is in danger? No, check the sort of “women clapback” evidence online. This bullshit is common and exhausting and it’s more commonly being dealt with by posting evidence because people are sick of it. Mr. Chbr shouldn’t be surprised because women on Instagram have done the same sort of screenshots of his messages …those just didn’t get shared as widely.

And let’s give some applause to the woman responding for having patience to respond clearly and thoughtfully. She doesn’t owe this taint-crust a goddamned thing. Not a single moment…but she’s trying to educate.

Educating doesn’t always work which, let’s say it again, IS WHY WE SHARE.

But he’s not saying that his behavior towards her was bad either. He’s not taking responsibility for anything.

We don’t know who contacted the journalists. It wasn’t Rey or Awesome Dancer.  300+ shares. If it reaches that many people SOMEONE is going to see it and realize there’s an audience.

No one said you have to lick feet, Chbr. None of us WANT to THINK about your tongue or body.

Who wants to bet he has fantasies about women licking his feet? Yeah. Me too. I didn’t need that detail. Let’s keep moving.

I’m GLAD he got called out.

YOU HEAR ME MR CHBR? I’m glad because Fuck You.

At last we can agree…GOOD JOB GIRLS!

Not all of you are in positions where it’s safe to name names and share. For those who can, I salute you! For those who can’t: we’re gonna try and work on this world. Hang in there, cultivate safe zones, and know your resources.

The patience to continue to respond clearly and thoughtfully, I don’t have it anymore. Let’s wrap this up.

Um. You haven’t changed in the past. SHOW, don’t tell. SHOW. 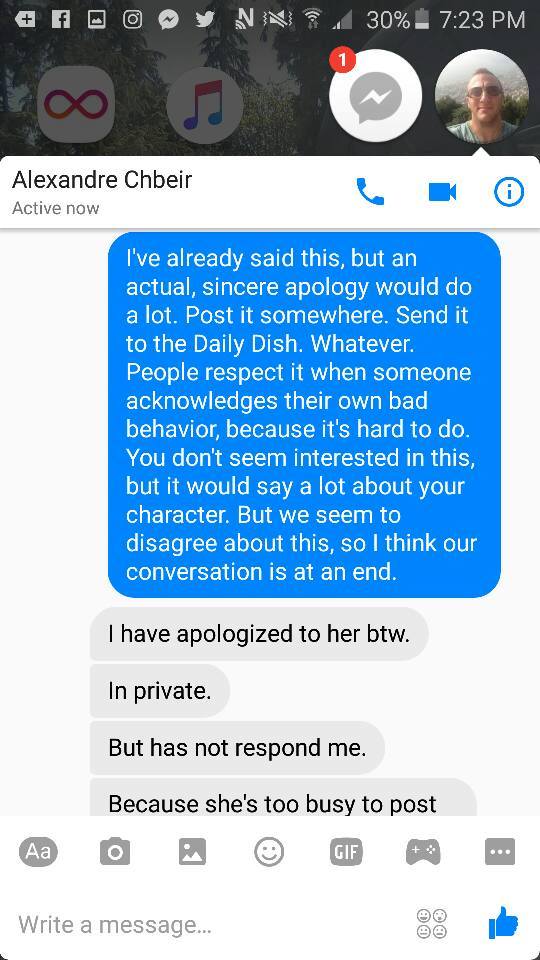 “I did but no one has ever seen it” (I think he’s blocked) the way to apologize is to do so before people pressure you into it, really….or don’t act so poorly you get blocked and exposed.
And then more angry bullshit about the dancer. Fuck that.

Hey, Mr.Chbr, you made it our business when you showed up in message boxes making demands. An easy solution was given but you wouldn’t and now you won’t let it die. VEXING, isn’t it? What would happen if I called you 15 times to suggest how you should act? Would you be patient if I shrugged and said “The worst thing I did was suggest he apologize and be better.” and then hounded your friends? NOPE? Because that calling and messaging would be harasssment 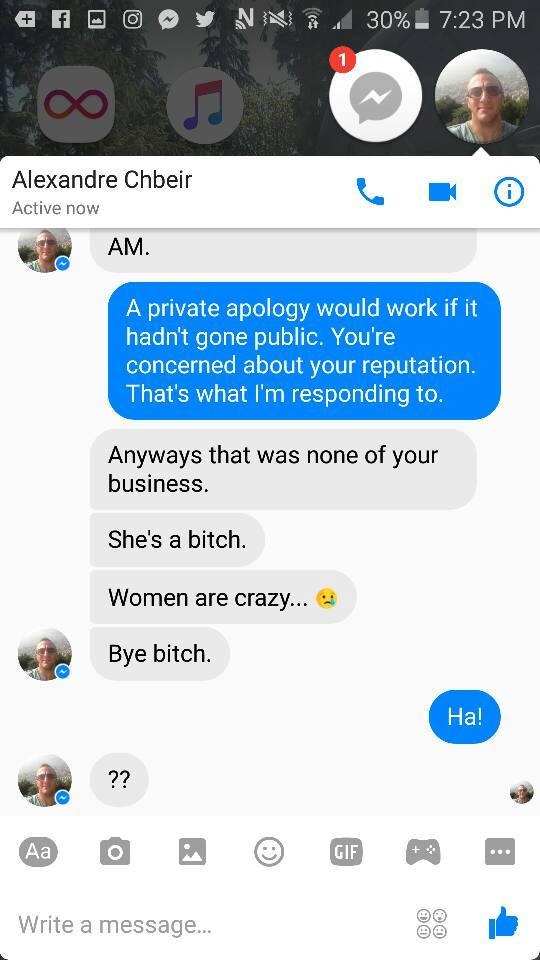 (singing) “and we see your TRUUUUUUUUUUE COLORS shining through…” 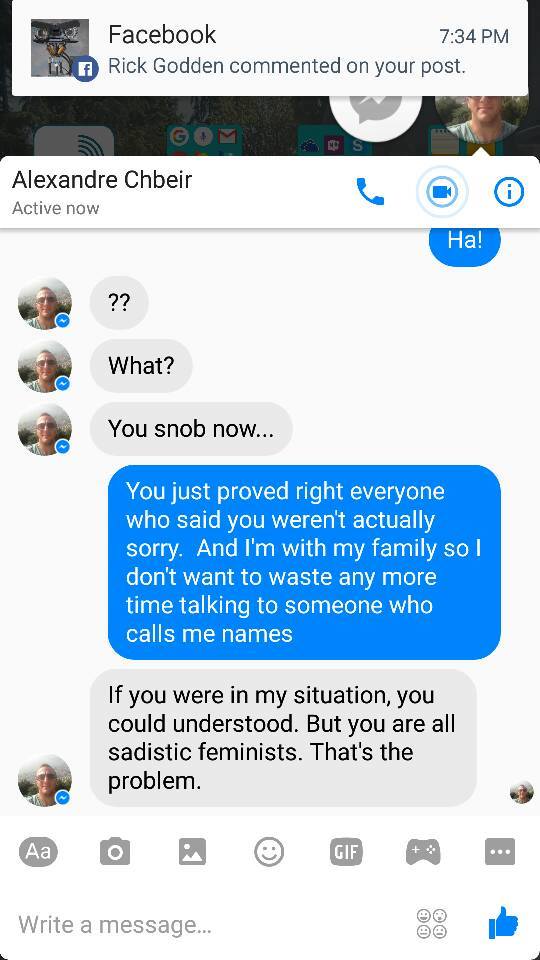 Nope, Mr. Chrb the problem is still you. 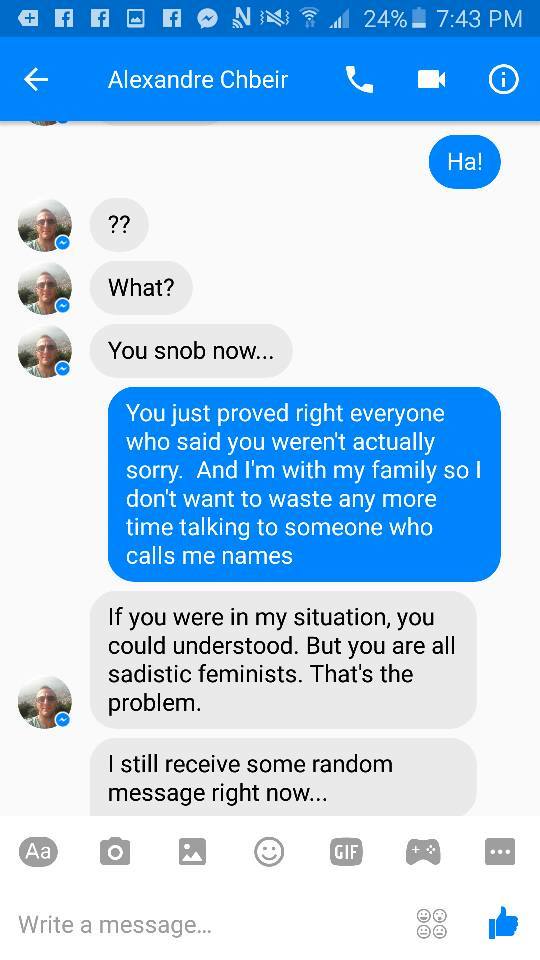 I’m not gonna be in your situation. NEXT.

FIRST OF OUR NAMES! SLAYER OF YOUR BULLSHIT! WE ARE BITCHES.

No. I don’t think you can do that. That’s too much to ask of you at this point

Move ON and leave women ALONE. Leave these women alone for a start.

Mr.Chbr, I doubt you’ve made it this far but here’s my last offer:

BUT HEAR AND KNOW THIS:
I am a VEXING sadistic bitch nasty woman supreme with fries on the side. I’m FINE with that. I floss my teeth with the tendons of my vanquished.  I will keep an eye on you for the next few months before a DAMNED word or name on this blog vanishes.

2 thoughts on “The vexing continued adventures of A.Chbr.”